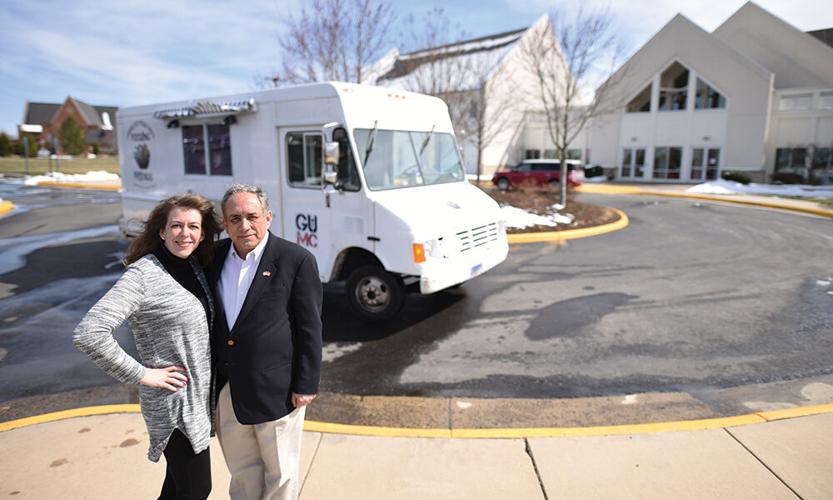 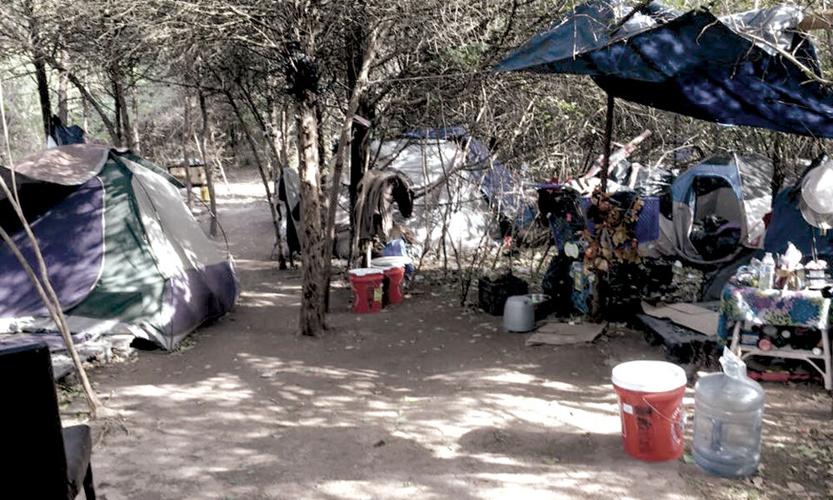 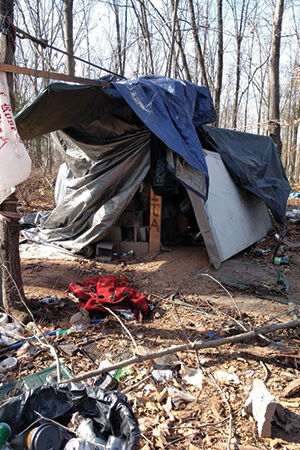 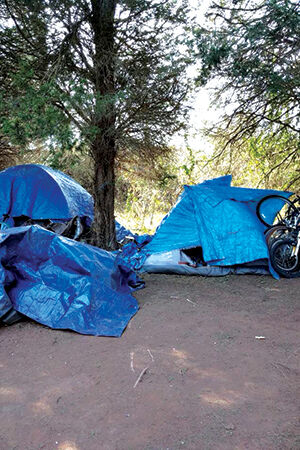 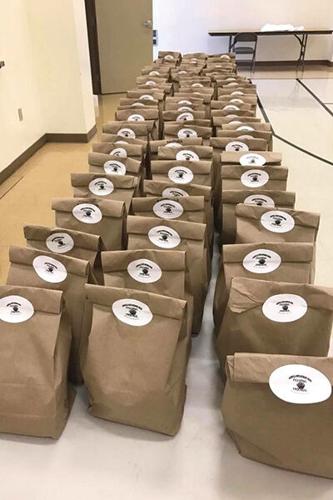 A community effort to help the homeless

Most people want to help in their communities, but how many will really make a difference? And whether we like it or not, or are even aware of it or not, our local community includes some homeless. For Ann and Kevin Rychlik, the founders and organizers of Feeding Friends, it’s all about building relationships. They are befriending, and feeding, the homeless in western Prince William County, and forming affiliations with the organizations that are in place to help them. Feeding Friends, which supplies the homeless with bagged lunches delivered via an occasionally temperamental food truck, is based at Gainesville United Methodist Church.

In August of 2016, Ann Rychlik and her husband Kevin started to think about things they could do to help others in their western Prince William community. Ann Rychlik explains, “We have a business in Manassas, and we started seeing more homeless folks there out and about. It kind of just prompted us to think, gosh, where do these people live, what’s going on? So we called Prince William County Social Services. And it was like a major answer to a prayer for her [the director]. She said, ‘You would not believe it, [although there are resources for the homeless in eastern PWC] we just don’t have the folks to help the western PWC homeless, and there really is a need.’ She was even able to provide us with a map of the homeless camps in western PWC.”

“So, after church one day we walked into camps, introduced ourselves, asked about people’s needs. There was an overwhelming need and response, it was an eye-opening experience.”

Senior Pastor John Patterson says that Ann and FF are a marvelous group, and speaks highly of Ann’s organizational abilities: “It’s just an extremely, extremely well-run organization.” Because the church considers it such an important ministry, they have set aside a large extra storage space in the church for use by FF, which enables them to store many more supplies and donations than they are able to store in the food truck. The church’s industrial kitchen serves as the preparation place for the food.

“We wanted to supply a healthy meal in our bag lunches, so each one contains a sandwich with meat and cheese made on whole wheat bread, a side, usually a fresh fruit, and a granola bar or something like that. We always add a condiment pack, with salt, pepper, mayo, and mustard. That seems like an insignificant thing, but we wanted them to feel like they some say in what they had. In the cold season, we decided to add hot soup.” Rychlik says. FF gives out 100 bag lunches on Saturdays and 80 on Tuesdays, and have never run out. Extras are donated to other charitable organizations such as BARN Community Housing for their residents.

The group, as a nonprofit under the umbrella of the church’s (501)(c)(3), joined Restaurant Depot where they could buy supplies inexpensively. Then something else happened.

According to Rychlik, “We applied to Panera to be one of their charities that picks up extra things. You would be shocked at the amount of food we get from Panera. We pick up every Sunday and Wednesday. We never have to buy bread any more. Also, we are able to provide every bag with a Panera treat, a muffin or a scone, something like that. Often a bagel as well. It’s just unbelievable.”

But then, it started growing and changing. Rychlik says, “It kind of morphed from just feeding the folks into something else. We would go and they would ask for other things…batteries, coats, and those seem to be real needs. We stock everything from chapstick to batteries to basic clothing needs: socks, hats, gloves. The whole works. Everything is donated by members of the church and the community. That’s one of my favorite parts about FF is that it’s not just a church thing. It truly is a community effort. People who are not members of the church come and help prep and volunteer. We get about 5-10 inquiries a week from the community about how to help and volunteer.”

Firewood is also a huge need in the cold weather. According to Rychlik, there is a family in the church that has a big piece of land that they’ve been clearing. Volunteers go out and help gather and split the wood, and FF is able to deliver firewood to the camps. She adds, “Sometimes other people drop off firewood… right now I have a big pile in the parking lot that someone dropped off… I have no idea who.” Pickup trucks with the firewood will follow FF to the camps on days they are able to offer it.

Sometimes, through larger donations, FF is able to offer some bigger ticket items, such as tents, sleeping bags, tarps, or lanterns. They are very thankful for the Gainesville Haymarket Rotary Club for donating some of the funds for these bigger items.

The photos on FF’s Facebook page are like a window into another world. There are photos of the homeless camps which will shock and dismay you. Who, and where, are the homeless of PWC, and why are they homeless?

According to Rychlik, “There are homeless camps in surprising places… right near where you work, eat, and run errands every day. Depending on the time of year, there are between 5 and 7 camps in the area covered by FF. The largest is right in Manassas, you’d be surprised if I told you where it was. In the summer, we can easily see 50 people there. In the winter, some are able to find other shelter and the numbers can go down to as low as 12 in a camp. These folks are literally living in a beat up tent with a wet blanket literally just steps from where we are. These people are mostly white, a few African Americans, and one or two hispanic, not a lot. We do run into veterans. There are more men than women, and we’ve only seen children on occasion. If we see children in a camp, we are supposed to contact PWC Social Services, because, let’s face it, there’s nothing good about a child in a homeless camp.”

Some of the homeless do have jobs. The insurmountable problem for most of them is saving up enough to move into their own place. First months rent, last months rent, and security deposits are hard for people who are in a difficult place in their lives to scrape together.

Transportation is a huge problem. Rychlik says, “Some of the homeless in Manassas got jobs last summer at a local business in Bristow, and they would walk out there and back after work… must be about eight miles. They were thrilled. I can’t tell you how proud they were that they had jobs. One of them said to me proudly, ‘You’re looking at a working man now.’ They want to work and contribute.” One of Rychlik’s ideas for the future is to hold a mobile job fair in the camps for them, perhaps with companies like landscapers who can pick them up for work.

Some volunteers are happy to help behind the scenes but are wary of going out in the field. Some have had bad experiences with the homeless, such as aggressive panhandlers. But Turner says, “These aren’t your stereotypic homeless folks. We haven’t run into any serious problems at all. All the people we help are very grateful and oftentimes have better manners than some of the crew. They never fail to say please or thank you. I’ve run into at least three who are aspiring pastors. Overall it’s been a very positive experience.”

The future: There are plans to grow, also. FF is fostering relationships with other organizations in the county with similar goals. “We would like to help more, but we’re not sure how yet. We are trying to fill a need by filling in where other organizations are not able to help. We are asking ourselves, can we help get people out of homelessness, how does that work? We don’t need to recreate the wheel, people are already doing it, we just want to help that process,” Rychlik says. “There are things that we can’t do that other places can, like showers or shelter. We all have our strengths, some organizations have locations to help but don’t have the volunteers to actually go out into the camps. There’s a need for both. We’re all about working with other organizations that have the same goals, to help homeless folks.”

There are people who slip through the cracks, obviously; if the system was able to work perfectly there would be no homeless. But there are also success stories of the system working and succeeding. “There was a pregnant lady in one of the camps… we brought her prenatal vitamins because she just wasn’t getting what she needed. She was able to get into SERVE, and from there she got housing for six months, so she’s good for now. That’s been a great success story. But we ask ourselves, so what happens after six months? That’s a big question. I don’t know. We want to figure out if we can we help with that.”

“There was one little girl, Sometimes she would be there and sometimes she wouldn’t. One week we went and she’d been very sick. The mother was worried, and we did call in to social services. They were able to give them a voucher to the Red Roof Inn and they were able to stay there for a few weeks. Then the dad was able to get a job, and they were able to go back and move in with relatives. We have not seen them back. It was good. The system worked the way it was supposed to, they didn’t take the child away from her parents, it was good.”

Even though this group is run out of GUMC, Rychilk says, “It’s important to note that we are not trying to push our beliefs on them. We are just trying to help and build relationships and have them feel like they’re a valued citizen just like the rest of us.” They are careful to respect the privacy of the homeless; they don’t ask them about themselves, although sometimes after several months they will come to trust enough that they will sometimes volunteer information. Turner says, “[These people] have reasons to be wary of folks. They’ve been taken advantage of, some of them have prison records, some are undocumented. There are reasons they are on the street. Most of it is bad luck, but not all of it.”

It’s all about building relationships and trying to help. And according to Rychlik, the process of building FF has been “completely remarkable. Honestly, we haven’t had a single stumbling block. Everything we try to do just works out. It’s been so easy. It’s really great.”