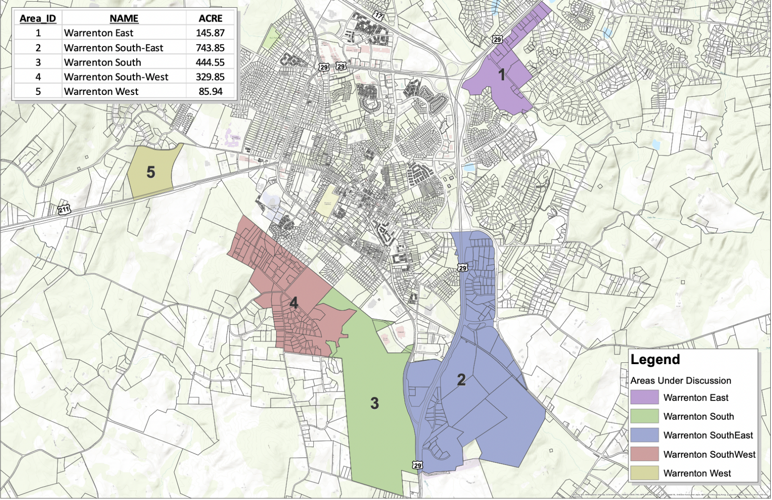 The town of Warrenton has proposed a boundary line adjustment that would absorb 1,744 acres from the county into the town limits. 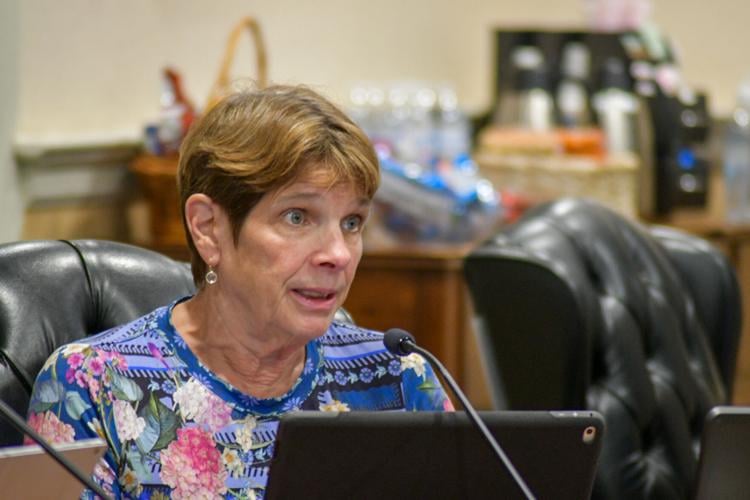 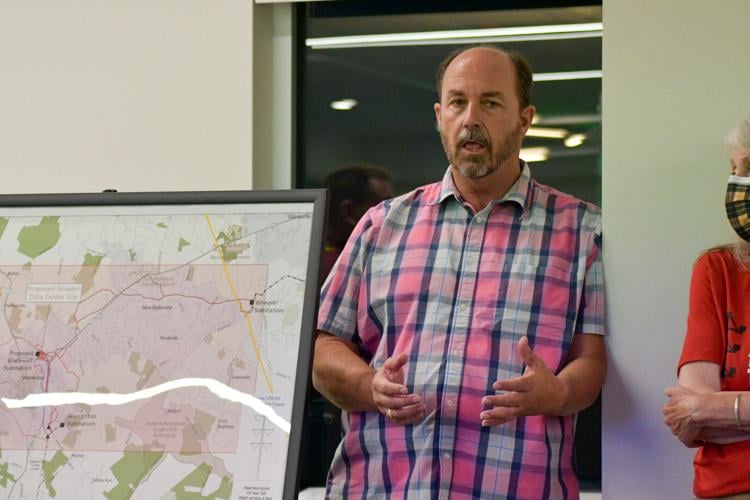 Scott District Supervisor Holder Trumbo said he was opposed to the proposed town boundary adjustment during a town hall-style event at the PATH Foundation in Warrenton on Aug. 10.

The Fauquier County Board of Supervisors have revised a resolution that would have allowed County Administrator Paul McCulla to publicize the town of Warrenton’s proposed 1,744-acre boundary line adjustment and schedule a public hearing on the proposal.

Instead, the new resolution, approved unanimously by the board on Aug. 11, authorized McCulla to send a letter to the council on behalf of the board requesting more information about the boundary adjustment before the public hearing process takes place.

The decision took some council members by surprise, however. Mayor Carter Nevill told FauquierNow the town and county have been discussing a boundary adjustment since the late 1990s.

“We sent a letter to the board last year asking if there were any concerns on the proposed drafts, and they replied that there were none,” Nevill said. “If [the board] had questions, we certainly would have arranged for the town-county liaison committee to meet then. We have long been eager to move this to the public phase and are frustrated that it is taking this long.”

Rather than beginning the public hearing process, which would have allowed for public input, the board voted last week to schedule a public meeting between the board and the council to learn more details about the proposal.

Several Board of Supervisors members, including Marshall District Supervisor Mary Leigh McDaniel and Scott District Supervisor Holder Trumbo, acknowledged they were confused about some of the details in the proposal. But the main concern each of them stressed was “creating a transparent process."

“Why is it being asked for? What [does the town] hope to accomplish? What is the financial impact is gonna be on the town constituents and the county constituents,” McDaniel said during last week's meeting.

“I think those are all fair questions that we need to vet with plenty of community input so we can see how this works out and come up with something that town and county residents can agree on,” she added.

Trumbo also noted during the meeting that county staffers need time to obtain more information about the boundary line adjustment process so members can bring any concerns to the town at a later meeting.

“We've asked the town to do the same and be prepared to bring their desires and concerns to the table for these discussions, so, again, the public can hear them and give us feedback on where this conversation is going,” he said.

Ward 2 Council Member Bill Semple, told FauquierNow in an email that his understanding of the board’s decision is that they want “a fully transparent process involving the public, whether living inside or outside the town borders.”

“I think that is a wise approach, and I look forward to future discussions,” he said.

The decision to delay the public hearing process comes against the backdrop of Fauquier residents’ resistance to Amazon Data Services’ proposal to build an approximately 33-acre data center facility within the town limits.

Last week, during a town hall-style meeting hosted by the Piedmont Environmental Council, Citizens for Fauquier County and Protect Fauquier at the PATH Foundation in Warrenton, several meeting attendees accused the council of wanting to expand the town’s boundaries to build more data centers.

Scott District Supervisor Holder Trumbo, who was the only supervisor in attendance, said the land the town wants to incorporate is not currently zoned for data center use. But he noted that could change if the town receives jurisdiction over those areas.

Trumbo said he was opposed to the town “annexing” land from the county and noted that he and other supervisors had consulted with the county attorney to ask how the county can stop it.

“Annexation law in Virginia is pretty one-sided,” he said. “If a town wants the land, they're almost certainly going to get it. So the only reason the county would consider a discussion is because the opposite side of this is for us to say no, [the town] sues us, both sides spend a ton of money on legal fees and in the end, [the town] still winds up with the land.”

The council has not yet engaged in the process of annexation, which requires a vote to petition the Fauquier County Circuit Court requesting to annex territory adjacent to the municipality's boundaries. The Supreme Court is then notified of the petition and must appoint a special court to hear the case.

Presently, Nevill said the town is pursuing a boundary line adjustment, which is a legal process where two localities may enter into an agreement to relocate the boundary line. The two localities must advertise and hold a public hearing before both bodies are allowed to separately vote on the agreement. If the town and county agree on a proposal, then counsel for each body must file a petition with the Circuit Court seeking approval for the boundary adjustment.

Although the town could pursue annexation as a last resort, Nevill said the town is trying to avoid this move and instead “work collaboratively” with the county.

“The town remains eager to engage our colleagues in the county in an open and transparent process,” Nevill said. “That is what we are asking for. Our interest in advancing a boundary line adjustment has been public knowledge since 2018. The pandemic and election of new council members stalled the process, but we have been working with the legal team at the county for at least the past year to move this forward in a collaborative way.”

According to town and county maps released at the December meeting, there are five respective areas surrounding the town being considered for a boundary adjustment.

The first is a 146-acre area to the northeast of Warrenton that includes the strip of commercial development along U.S. 15, as well as undeveloped land to the south of Cedar Run Drive. There are another 86 acres of undeveloped land, currently zoned for residential development, to the west of the Warrenton Aquatic and Recreation Facility. But most of the land that would be absorbed is approximately 1,500 acres of rural residential zoned land, including Laurel Ridge Community College, located adjacent to the southern edge of the town boundary between Lees Ridge and Meetze Roads.

In a letter to the board last month, Nevill said that among the benefits the town would experience from absorbing these parcels – located within the town service district – would be an improvement to its commercial tax base, expansion of its “industrial use needs,” enhancement of the partnership between the town and Laurel Ridge and “legislative authority” over its southern gateway.

Nevill said there currently aren't plans for data centers in these areas, and he noted that the longer the process takes, "the more misinformation is spread, which is a disservice to all parties, especially our residents.”

Once a county staff report is prepared, McCulla said it will be shared with the town, after which the county and town may enter into discussions.

“The board proposes that, after both the county and the town have prepared and exchanged staff reports, the board and council meet in an open public meeting to discuss those issues and work out a boundary adjustment agreement that is fair to all parties and fully transparent to the public," McCulla stated in the letter.

I think the latest moves by the town on the Amazon property displays the kind non transparency we can expect on future major special permit applications by special interests such as Amazon as it affects our adjoining county landscapes. The Dominion power line and substation are examples and the recent sudden resignations of key players in the Amazon proposal all point to non shared values for future of our county and incorporated areas within. I am particularly appalled by the towns sudden willingness to throw out a highly involved and community consensus effort to develop the New Gateway zone within the 2040 vision for Warrenton. If this is how placing new areas from county to town is going to go I say fight it till the end in court…even if it seems it is futile based on state precedent.

You are spot on! This is a horrible

travesty, so thank you for speaking out for all of us. Fight on!!

jp8: Residents of towns in Virginia must pay real estate and personal property taxes to both the town and the county in which the town is located.

This Town is not nearly as functional as many other towns in Virginia. It is basically just another level of bureaucracy and taxes. Towns were originally created to provide services that rural counties could not. That is no longer the case in Fauquier.

This is all about the Town getting more income from their meal tax on all the restaurants in the proposed annexation, and allowing developers to build on every square foot of open space. To all those in this proposed annexation area I would fight this.

I agree, that's the tax I'm referring to as well as property. As the population continues to grow with the NOVA transplants, the Fauquier we grew up with is becoming a distant memory, their opinions and votes are already being felt, SMH

The town cant police what they have already I don't think they should get anymore.

It appears that this is basically the town wanting to take taxable properties from the county, this should be interesting, will the county homeowners have to cover the lost taxes, that's the question......SMH